In 2004 I returned to the US after a seven-month stay in Germany, and promptly hit the road with Matt Hopper for what we optimistically titled the ‘Death of a Dayjob Tour’. Cute title aside, it was a continuation of fairly major changes in my life, and in my approach to music. Before long I became totally consumed by the day-to-day grind of keeping myself on the road: endless booking work online, researching and emailing venues and other artists, stuffing envelopes with CDs, sending press releases, maintaining websites, not to mention getting myself to a gig and performing most nights of the week. This schedule didn’t leave a lot of room for songwriting at first, and as Stateside‘s newness faded, I started to realize I would do well to have a new piece of merch on the table each night.

Fortunately, I had a few songs halfway in the can already. Before leaving Seattle in 2003 I had recorded three new songs with Shawn Simmons under the generous pretext of the sessions being a chance for Shawn to test drive some new studio toys. Given that approach, these songs already sounded strikingly different to the dry, acoustic music we’d been making.  Experimentation abounded, and we had a blast twisting knobs, coming up with weird sounds, and pointing the music in a lush, layered direction.

Josh Williams played some drums over a loop on “Effortless” and rubbed dry sponges across his snare live in the room for “Blind Tonight”, turning the former into a seductively lazy, almost hip-hop inspired pop tune, and the latter, an organic acoustic piece that might have previously fit on Stateside, something more surreal and disjointed. Patrick Porter played some steel on “Blind Tonight” and bass on “Crossing Over”; both parts Porter cooked up were something special, and became the songs’ inarguable musical signatures.

“Crossing Over”, at that point, was the most elaborate production, with the song’s spare piano changes and minimal guitar laid over an elaborate computer-based framework of loops and beats. We took the tracks to Studio Litho to mix with Floyd Reitsma, and I left the States with a very fancy three-song demo.

When I got back from Germany I ducked into Shawn’s Phantom Center studio for what, unbeknown to me, would be my last time, and knocked out acoustic demos of two new songs. “Something Else Instead” was one of the thirty-odd songs I’d written overseas, and “Hardest Day” was something I’d sketched out at Shawn’s apartment between Northwest shows at the start of the ‘…Dayjob’ run. I gave Shawn the green light to do whatever he wanted to the songs for fun.

A year later I found myself in Tempe, AZ temporarily living with friends and working between tours, and Shawn and I began corresponding about the idea of putting all of this work together in a releasable package. He and Porter had really gone to town on the remaining songs, and with the able assistance of old friend Kris Rosentrater on the skins, transformed my acoustic demos into full-blooded pop productions. “Something Else Instead” started acoustic, gained some quiet drums and bass early on, got a nip here and a tuck there, and finally blossomed into a gorgeous outro of cascading vocal harmonies, xylophone, and slide guitar. They had turned the stark, skeletal demo of “Hardest Day” into a little nugget of pop sunshine, with two simultaneous drum performances from Kris anchoring a restless bass line and ethereal electric guitar from Patrick. The two-minute track had more melody packed into it than many I’d made twice its length. When Shawn had Kris record real drums over the canned beats of “Crossing Over”, the whole group of songs started to feel of a piece. 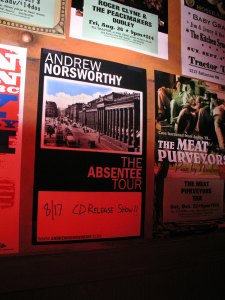 When the EP format became the obvious vehicle for a release, I felt we were short a song, and two possibilities were explored. The first was an outtake from Some Low Beauty called “Unbreakable”, and the other was one of a series of remixes our friend Roy Dean had been doing of Stateside‘s “Dead Soldier”.  Both options had their merits, and the inclusion of either would have provided ample affirmation of the record being a pastiche of experimental and unusual studio efforts, rather than a straight solo album from an acoustic singer/songwriter.

Ultimately Roy’s dark, ominous treatment of “Dead Soldier” was chosen, and in being the most uncharacteristic sounding recording I’d released, the most obvious clue to what the spirit of the EP was intended to be.

For me, this record stands as a beautiful document of my friends’ support for my situation at the time, and an artistic sympathy for my work not to be taken for granted. I didn’t have the cash to make a new record, and they came up with a way to make it happen while I was out there on the road. The only “cost” to me was the production authority that would typically have been mine to wield in the studio, and in relinquishing that I wound up with a very rich group of recordings that continue to give up new surprises to the guy whose name is on the sleeve. Shawn really pushed himself on the mixes, and the result is, to my ears, a rich sonic treat, one that I find to be much more fun to listen to than the records where I was in the room, toiling shoulder-to-shoulder with him.